The conventional expectation is that enlightened beings (gurus), detached from the world, meet it passively and equanimously. If they do not immediately retreat into a hermitage or found an ashram, they selflessly help other people.

This behaviour becomes clear if one takes into account the still incomplete state of consciousness (half-time of evolution) of conventional enlightenment. Up to now, enlightenment has been equated with an identification with the divine part of consciousness. This means rest / stillness and is accordingly also achieved through rest / stillness as well as in the temporal Now (Eckhart Tolle).

However, the complete transcendent consciousness does not only consist of the divine consciousness part as enlightenment-illusion, but contains different dynamic parts up to the active inner man. So if someone wants to experience her/his divine consciousness, rest / stillness is called for, while earthly life means activity. This is where the conventional enlightenment instructions to go into stillness / silence in order to find the Divine come from, because a separation between Divine and earthly is assumed.

With Am-Ziel-Erleuchtung© [Final-Enlightenment(AL) respectively New Age Enlightenment(AL)] this separation between Divine and earthly is removed, so that the earthly becomes the created expression of the Divine. Accordingly, the stillness / silence can be dynamically realised earthly and at the same time permeates the earthly. The weibliche Spirituelle System (female Spiritual System) in passive form and the männliche Spirituelle System (male Spiritual System) in active form are available for this purpose. Which focus the souls want to set with their creation of love, they have already determined before their incarnation and bring with them corresponding prerequisites.

Personally, my main task is to implement changes in society as a whole in order to accompany humanity to the higher level of consciousness of the new age. Accordingly, I live the Am-Ziel-Erleuchtung© situation-dependend quite active, dynamic and creative. For this purpose, my initial personality structure already contained a strong inner man part, through which I led a life that tended to be adventurous.

If the conventional enlightenment is lived without displacement of the ego with at the same time divine and earthly parts of consciousness, this corresponds to the separation-manifestation. I lived this state many years ago as an intermediate step into the Am-Ziel-Erleuchtung©. One can manifest with this state of consciousness for example a wonderful vacation 🙂

Many years ago, my husband (1989-2009) and I spent a little bit more than a week by dog sled on the Iditarod Trail in Alaska. We each drove our own dog team and followed the organiser’s dog sled. As soon as we arrived, one dog loved me so much that he peed on me and the organiser therefore assigned him to my team. The ride looked like this: the dogs started running as soon as one stepped off the brake. To get the dogs to stop, one had to put the full weight on the brake again and stay on it until the dogs were unhitched. At night we stayed in very simple wooden huts or in a tent.

For the first test drive, we had glorious sunny weather at a mild minus fifteen degrees. As it progressed, it became cooler, but remained beautiful. Only once did we experience a heavy snowstorm at minus forty degrees. As a result, we made such poor progress that we had to drive through a forest in the evening. With torches attached to our heads, snow on our ski goggles (in my case also fogged-up regular goggles underneath) and branches hitting us in the face as well as branches we had to duck under, we raced almost blindly through the forest with unpredictable curves. The only way to slow down would have been to use the brakes all the time, but the dogs were too exhausted for that after this exhausting day.

The organiser told us afterwards that he had been seriously worried about this most difficult section of the route, in the worst weather conditions of all, because accidents have happened there even under better circumstances. But we had managed the forest incredibly well. For me, this experience meant having experienced Alaska with all its facets even in the real force of nature, so I also found this section of the route to be excitingly positive. The entire dog sledding trip, far from civilisation and at one with nature, had been a fascinating adventure.

By the way, for Christmas I gave myself a Playmobil dog sled team out of this memory 😉 .

But one don’t necessarily have to travel the world to live a certain spirit of adventure. It had been a dream of mine to spend the night in a self-built igloo. The opportunity arose when there was a very long, cold winter with lots of snow in Berlin in 2010. Together with my son, I built an igloo on a frozen lake, hidden in the reeds. The first attempt to spend the night in it was so cold that we had to abandon it at about two o’clock in the morning. For the next night we took everything we had in the style of sleeping mats, blankets, sleeping bags and warm clothes, so that in the morning we could greet the day in wonderful open nature. 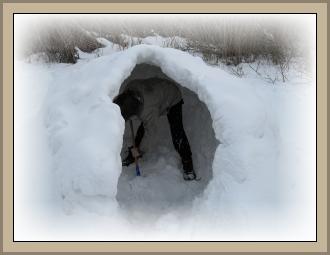 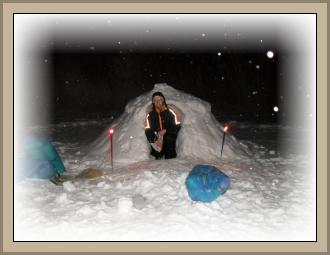 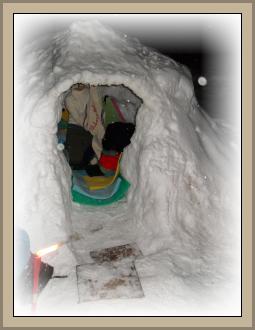 Both experiences, the dog sledding holiday and the Iglo overnight stay, were at the same time dynamic and embedded in the calm / silence of the Whole. I was emotionally-energetically one with nature and experienced its stillness / silence as deep peace and harmony, while at the same time actively experiencing it. At that time, I perceived the two poles of consciousness of peace / stillness and activity at the same time, but without being divine-earthly connected. In the meantime, with Am-Ziel-Erleuchtung©, the dynamic earthly creation of the Divine embedded in harmony and stillness is the normal state.

The divine Whole is love, harmony and peace. In the earthly, this loving state of rest may be dynamically realised as an active creation of love with intense positive feelings and fascinating adventure. This happens through the divine-earthly connected consciousness of Am-Ziel-Erleuchtung© quite automatically in accordance with the soul task and personal feeling. The Divine permeates the earthly and the earthly is at the same time part of the Divine ‒ and everything is love.

You can find an overview of interactive at “blog about New Age Enlightenment(AL)“; see also Spiritual Masters of Am-Ziel-Erleuchtung© or conventional gurus (e.g. Sri Chinmoy as well as    Eckhart Tolle) and spiritual experiences.