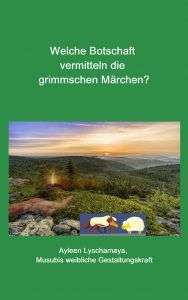 However, at the same time that would be a pity, because in two respects the Grimm fairy tales are still a real treasure. Firstly, they provide good material for science. Whether it is a matter of psychological and cultural contexts or historical explanations, everything is much easier to see through if one knows the hidden influences in human consciousness.

Secondly, the former favorite fairy tale is retrospectively a good aid to self-knowledge ‒ as long as one does not further expose children to such fairy tale messages in the time to come. I would like to illustrate this with my own personal favorite fairy tale. This did not belong to the Grimm fairy tales, but was the Russian folk tale “The beautiful Vassilissa”. The strong female spirituality appealed to me. In opposite correspondence, I liked “Hansel and Gretel” the least of all fairy tales, because in this fairy tale the female spirituality is completely destroyed.

“The beautiful Vassilissa” used to be my favorite fairy tale, in which I particularly liked the stay with Baba Jaga. However, even as a child it bothered me that Baba Jaga was described somewhat ambivalently. In my opinion, she should have remained fearsome, but should have been more clearly good to Wassilissa. In my imagination, I made Baba Jaga the strong, good wise old woman. The end with the king or tsar, after the burning of the stepfamily, my fairy tale version at that time either did not contain or I had forgotten it completely in the meantime.

Why had this been my favorite fairy tale? Well, hardly surprisingly as Musubis female creative power. I was fascinated by this fairy tale, because Wassilissa set out on the path to the female elemental force, exactly my later life path, already imprinted as my soul plan.

The three horsemen, as white bright day, the red sun and black dark night, had already irritated me as a child. Presumably they were the remains of the original Baba Jaga as a nature-loving goddess. But the universal origin of the feminine was already twisted to earthly riders. This did not correspond to my still intuitive knowledge about the actual orientation of the female elemental force towards the Universal.

Also the prohibition against asking too many questions bothered me a lot, even then. It contradicted my strength of knowledge, which was my driving force on my spiritual path. Moreover, why should only questions about the outside be allowed, when the essence of the wise old woman as questions about her inner being was access to the Universal? Today, I know that these fairy tale messages were wrong. At that time they irritated and unsettled me.

To burn the stepfamily, that is, to suppress it, is not right in the fairy tale. The ambivalent, already somewhat twisted universal access through Baba Jaga is the strength of the feminine. But instead of establishing this universal strength into the earthly feminine through Wassilissa with her intuitive doll, the repression of the stepfamily occurs. In fact, this displacement from out of Baba Jaga in this form is not possible at all.

For displacement it needs mental body energy, while Baba Jaga has healing spiritual energy. Also, fire is the male element. Therefore, it can be assumed that the origin of the fire of displacement was not with Baba Jaga, but hidden influences of the karmic dominance system show up.

At the end, Vassilissa marries the king or tsar, but continues to carry her doll intuition with her for life. She keeps no contact with the powerful Baba Jaga, but the mellowed old woman from the city she takes in.

In this fairy tale, the strong femininity was met with courage, which is why it used to be my favorite fairy tale. However, this strength is then directed against one’s own feminine, so that the feminine still emerges from the fairy tale with residual strength, but already weakened. Therefore, this life instruction of the fairy tale can also only be advised against.

Continue to fairy tale history, the five fairy tales of the new age or to the revised fairy tale “Snow White heals the Queen“.