What is the truly new? ‒ The connection between the Divine and the earthly

All psychotherapeutic, coaching and spiritual methods known so far, either aim at the earthly (that is, at the human psyche with karma and body respectively the ego) or try to support the switch into transcendence. The variety of methods is increasing, but so far the level as such has not been changed. The switch into transcendence as a conventional enlightenment is not yet a new level, but only the other half of a consciousness that is still divided in itself. Only the connection of Divine and earthly is now, with the Am-Ziel-Erleuchtung© [Final-Enlightenment(AL)], the new developmental step in transcendental-human consciousness. This is the evolutionary leap of consciousness into the new age, the second half of “halftime of evolution” . 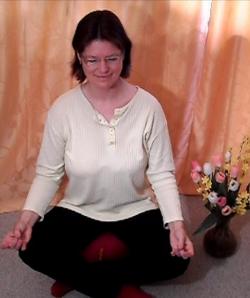 With the generally known further methods, such as past life regression or chakra cleansing as well as hypnosis or meditation and laying cards, transcendence is linked to, but without establishing the connection between Divine and earthly in consciousness.

Especially the connection between the Divine and the earthly in consciousness is the aim of the “Guilt feelings deletion ‒ live love ‒ method©“, in short “Guilt feelings-dll-practice©”, Spiritual EMDR(AL) and Belly Dance as Movement Meditation(AL). In addition, there is the Indirect Love Energy Healing. These are the spiritual methods for the second section on the complete spiritual path. The third section of the complete spiritual path finally ends with the Am-Ziel-Erleuchtung© [Final-Enlightenment(AL)].

With the Final-Enlightenment(AL) the ego, cured to the healthy psychic inner family(AL), is integrated into the Divine. Final-Enlightened(AL) Ones are not only connected to and embedded in universal love, but also filled with it into their earthly personality structure. Out of this inner abundance, they automatically pass on universal love to other people.

On the first stage of the complete spiritual path, therefore, the psychotherapeutic(AL), coaching(AL) and conventional spiritual methods are to be applied. The connection between the Divine and the earthly is then to be established with the new spiritual methods Guilt feelings-dll-practice©, with additionally Spiritual EMDR(AL) and Belly Dance as Movement Meditation(AL) as well as Indirect Love Energy Healing. Thus, one next arrives at the third section with the goal Am-Ziel-Erleuchtung©.

What level of consciousness does Eckhart Tolle teach? What wisdom does Sri Chinmoy impart? What spiritual errors does Anssi Antila commit?
Spiritual path: New forms of meditation for the second and third sections of the complete spiritual path