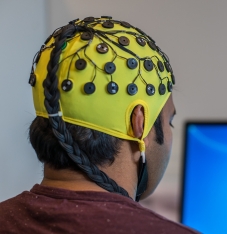 The aim is to investigate, how the targeted creation of consciousness affects the earthly part of consciousness, especially the brain. The insights to be gained from this can provide important information about the functioning of the human brain.

Overview of the state of research to date

With this project, consciousness research is based on the personally experienced and in its structure recognized complete transcendental consciousness, so that it is sufficient to give only a brief overview of the state of research to date:

How can spirit arise from matter? To this end, among other things, animal experiments on the sensation of pain have been carried out, which ultimately remained open in interpretation.[1]

A central task of neuroscience is the search for the neuronal correlate of consciousness. That is, researchers want to find out, how our subjective experience emerges from brain processes. Some philosophers, on the other hand, doubt that the riddle of consciousness, with its subjective character of conscious experiences, can ever be solved by empirical scientific means, since these precisely dispense with the subjective perspective.[2]

The EEG records the sum of the tiny voltage fluctuations (of about 10 to 100 microvolts) on the surface of the skull, which the nerve cells of the cerebral cortex generate during their activity. For example, the level of consciousness of unresponsive patients can be measured with a “zap-and-zap” procedure. This involves first stimulating a specific area of the brain with an electromagnetic pulse and then recording the neuronal response by EEG. Consciousness is distinguished from unconsciousness by a higher complexity of the EEG signal.[3]

Brain areas responsible for wakefulness, sensory processing, attention, memory and emotions, for example, are supposed to interlock as partial functions in such a way that consciousness ultimately emerges from them. The synchronisation of nerve cell activity is said to be decisive for this. Through synchronisation, the neurons are supposed to selectively open a communication channel (comparable to a telephone line for long-distance calls) that enables a particularly efficient exchange of information. Neurons from different areas of the brain are said to organise themselves into complex networks, giving rise to consciousness.[4]

People are always conscious and unconscious at the same time and both work together. This leads to a neuroscientific view that our minds are constantly making predictions about future events. Consciousness arises from prediction errors, i.e. surprise. When something does not go as expected, consciousness arises. In the process, our brain tries to avoid this state at all costs.[5]

How useful are these approaches?

Since consciousness research, as this project, concerns the whole of transcendent consciousness, previous findings and methods need to be examined for their usefulness for this expanded scope.

Animal experiments on consciousness that inflict pain on animals or otherwise interfere with their natural lives must be stopped. When animals are tortured for their pain behaviour in experiments, only to deny them their consciousness despite clearly feeling pain, this only proves one thing, namely how low the level of consciousness of the researchers is. Consciousness does not arise from evolution, but creates evolution. This previous research approach is wrong.

The fact that only the physical effect on the nerve cells of the entire higher consciousness is measured by EEG, while the higher layers of awareness themselves remain unnoticed, speaks against a distinguishability. In favour of distinguishability, however, the higher layers of awareness may have changed brain activity right down to concrete brain use.

The approach of starting with the complex networks of the brain areas is helpful if one does not try to conclude from these to consciousness, but investigates the other way round. Which networks are generated by the higher level of consciousness? The actual networking takes place at the higher layers of awareness and is therefore not measurable with scientific equipment. However, how does the increased flow of energy into the earthly, the dissolved repressions also in the earthly part of consciousness and the delimitation in the earthly affect the brain?

This identification with the earthly structures is also the reason, why people have so rarely been able to distinguish between an experience on the one hand and their judgement or assumptions about this experience on the other. In the meantime, however, there are people, who are able to identify themselves at will with all their different contents of consciousness, depending on their consciousness-creation, so that they can distinguish between their experience and the evaluation of their experience from the higher layers of awareness. Does this show up in the brain, and if so, how? These are the questions this project wants to explore.

What predictions result from near-death experiences?

The descriptions of near-death experiences, including the feelings of freedom from pain, with instead peace, joy and bliss, correspond to those of other states of consciousness, such as those triggered by meditation. Gamma, alpha and theta waves can be specifically activated through meditation.[8]

It was also found that in a certain intermediate phase after cardiac arrest and before brain death, some brain activity increases. The researchers did not observe a slow ebbing of neuronal brain activity, but quite the opposite, an extreme increase in cognitive processing; especially that of gamma brain waves and somewhat also of theta waves.[9]

These research findings so far suggest that the neurological effects of consciousness creation with total transcendental consciousness should also be measurable. Moreover, interesting and helpful results for the understanding of consciousness and the brain can be expected, because Musubi (the Universal Whole) leads us into this research project.

Project group: Ayleen Lyschamaya together with the Consciousness Coaches of the Am-Ziel-Erleuchtung© Christine Ottens and Johannes Hermsdorf.

Current project status: The research project is still in the preparation phase of the concrete experimental design. Hints, ideas and cooperations are welcome.