Amma[1] (No. 27 on the 2017 Watkins’ List) was born in 1953 in very poor circumstances in India. Even as a child she felt deep compassion and love for people. She is now known for her selfless love and compassion around the world. She is the director of Embracing the World, a multinational collective of non-profit organisations dedicated to providing food, clothing and shelter to the poor and needy. Amma is also the Chancellor of Amrita University, which was made India’s first UNESCO Chair on Gender Equality and Women’s Empowerment in 2016.

Amma regularly travels all over the world to conduct free public events. She concludes these each time by hugging every single person, who attends the event.

Although Amma is widely regarded as India‘s leading spiritual figure and one of the guiding forces of Hinduism, she says that her religion is love. She sees no one as separate from herself. A constant stream of love flows from her to all creation. This, she says, is her innate nature.

Amma has received various awards and honours, for example the “Gandhi King Award” for non-violence and the “James Parks Morton Interfaith Award”. She was named a representative of the Hindu faith and honoured as an outstanding spiritual leader and for her humanitarian work.

I would like to highlight in Amma, how much she supports the new age through her commitment to women/femininity. To this end, I would like to reproduce two particularly valuable quotes[2] from her:

“All the powers women need for this ‒ love, compassion and patience ‒ are innate in them, being the very essence of the motherliness that resides in them. Women need only awaken to this maternal power.”

Amma describes and lives in the most complete expression and in a very positive way the female Spiritual System. Accordingly, she is justifiably recognised for it. At the same time, however, she is not a role model or ideal for her own personal development.

Amma’s popular question is: “If it is someone’s karma to suffer, is it not our duty to alleviate her/his pain and suffering?” ‒ No, it isn’t. Amma does not distinguish the layers of awareness ranging from divine all-connectedness to individual divine-earthly connection to earthly demarcation. Love and compassion can mean helping others earthly concretely in everyday life, but they can just as well require letting the other person have her/his developmental task. I explain more about this in “The complete spiritual path” in my answer to question V-1.

With Amma, universal love flows to others with the emotional involvement of her motherly inner woman (personality test). Thus, the structure of her consciousness corresponds roughly to that of Eckhart Tolle. My consciousness diagram on Eckhart Tolle basically also applies to Amma. Amma only remained identified to her divine consciousness from the beginning, so she did not experience enlightenment. In addition, she is more intensely identified with her inner woman than Eckhart Tolle, so that she appears particularly emotional and loving.

At the same time, Amma has hardly any or a repressed inner man part and has such a pronounced guilt-feelings blockage that her universal love flows to others, but not to herself. Thus, she enumerates that her love flows to “… all people, animals and plants, rocks and rivers …” as well as “… extends to all nature and all living things. …” ‒ only herself she does not mention. She lives her entire life just as selflessly. However, Amma’s confidante for decades, Gail Tredwell, in her book “Holy Hell”, makes serious accusations against Amma regarding negative behaviour outside the public sphere.

This selflessness, often praised as a spiritual ideal, is nothing more than an imbalance in consciousness, particularly pronounced in Amma, which is based on the guilt-feelings blockade. Amma would have to dissolve her guilt-feelings blockade in order to be able to accept universal love for herself as well. Then she would not only pass on universal love to others, but also become a role model for spiritual personality development and expansion of consciousness. Her motherly love for others would become a complete fulfillment of love that would also fill herself completely. Through this, she would then also live her soul task less generally, but more purposefully.

In summary, Amma supports the new age through her healing of the feminine and her equal acceptance of the feminine and masculine, but does not go as far as the divine-earthly connection in her consciousness and thus also in her love-radiance as well as overall socially. Since (inner) women in particular have to deal with feelings of guilt, and it is precisely these that prevent a better life, it is indispensable for Amma to make the dissolution of feelings of guilt the main focus.

I also deal specifically with Amma in my travel report “Healing the World through Consciousness Development for India ‒ New Age: Transforming Buddhism and Hinduism“. This travel report is contained in “Musubi World Healing: The Bible / Holy Scripture of the New Age“. 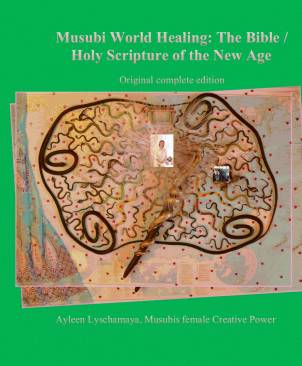 Mother Meera[3] was born in 1960 in South India and now lives in Germany. She is widely regarded as an embodiment of the Divine Mother on earth. Her devotees refer to her as Avatara [Note: Avatar means “deity descended into earthly spheres”]. ‒ In fact, this divine aspect is contained in all transcendent human beings. Only the starting point of human beings is different until they reach the complete consciousness of Am-Ziel-Erleuchtung©. Avatars are therefore not fundamentally more spiritually developed than “normal” human beings, who initially identify with their earthly portion of consciousness. Avatars merely identify with their divine consciousness part from the outset and live the love and compassion of the feminine Spiritual System.

It is said about Mother Meera that she came to purify and transform the world consciousness for a higher level of evolution. For this to happen, she brings down the Light of the Highest to the earthly plane. Mother Meera: “The whole reason for my work is to bring down the Paramatman Light and help people. That is the reason I am here ‒ to open your hearts to the light.”

During her free darshans, Mother Meera prepares humanity to open to the light to manifest the divine life and will here on earth. Her darshans take place in silence. She touches the visitors on the temples and then looks them into the eyes.

Mother Meera does not see herself as a guru surrounded by disciples, but as the one mother who is always available to all who need her help or blessing. Her basis is compassion and unconditional love.

Having already commented in detail on Amma (see above), there is not much more to say about Mother Meera, because her personal structure of consciousness is identical to that of Amma. Only her focus is somewhat less in the feminine-earthly than Amma’s and instead, through her emphasis on light, somewhat more energetic and in the Universal Whole.

Although Mother Meera is said to want to support the world consciousness for a higher level of evolution, she rather contributes little actively to it. [Note: Incidentally, the Divine Mother does not represent the dynamic aspect of the Godhead, as she claims, but the healing aspect. The dynamic aspect is represented by the male Spiritual System. “How dynamic is enlightenment?“] The universal love energy does not also flow into Mother Meera herself, nor does Mother Meera specifically support the feminine or does anything else specifically for the connection of Divine to earthly. However, the higher world consciousness of the new age exists in this connection of Divine to earthly.

What is valuable, nevertheless, is that Mother Meera lives the qualities of the feminine Spiritual System, love and compassion, in such a pronounced way that people experience the positive effect of these qualities. This helps to support feminine understanding of God in the West.

Note: You can find videos about Mother Meera on “New Age TV ‒ of the Final-Enlightenment(AL)“.

All Spiritual Masters and Gurus of the Am-Ziel-Erleuchtung©, who have chosen to focus on healing, have walked the Liebesweg (path of love). Unlike the conventional avatars and gurus of healing, the Am-Ziel-Erleuchteten© have dissolved the guilt-feelings block in their consciousness, so that universal love also flows into themselves and through them to others. This resonance-vibration automatically leads to healing, consciousness-creation can be added.

The radiance of love of all Am-Ziel-Erleuchteten© has a generally “contagious” effect on other people and thus brings about the evolutionary leap of consciousness into the new age in general society.

Further to a new understanding of souls and soul agreements

Note: The images of public figures are taken from Wikipedia.