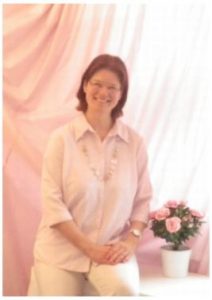 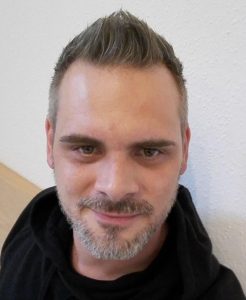 The Universal Plan (Musubi) foresees, from the feminine basis of the new age, to change the world very concretely into a loving earth. For the healing of the world, it is necessary that the earthly claim to power as well as the victim role, which had developed separated from the Divine in the old age, are healed. Then they can be given up out of the free will of the people. Thus, again linked to the Universe, the soul love then can be lovingly created from Divine to earthly.

The connections of these entanglements, from dominance behavior as a karmic power-blockade and the victim attitude as a karmic guilt-feelings-blockade, are explained in detail in the article “The Universal Plan, claim to power, guilt-feelings entanglements and conspiracy theories“.[1] Therefore, we do not go into this any further here.

The entanglements of the old age have already been energetically dissolved from their origin by Musubis female Creative Power Ayleen Lyschamaya. The new age is here and this can already clearly be felt by all people, even when it is generally still difficult to break away from the old and engage with the new.

How did the old entanglements lead to complete separation from the Divine to the point of distrust and conspiracy theories? Firstly, an overview: 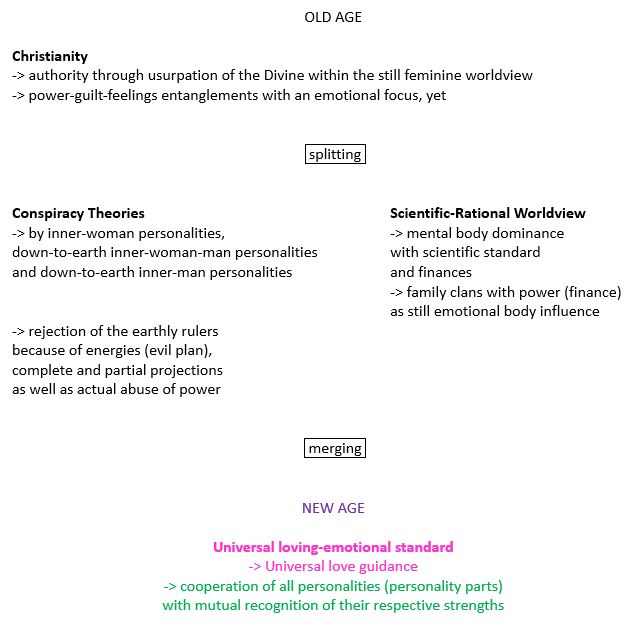 Collective state of consciousness: Universal access was lost and replaced by the pseudo-divine, but actually earthly ecclesiastical authority.

Looking at our human history, referring to the entanglements of dominance behavior and victim attitude at that time, it is easy to recognize the distorted divine orientation up to the guilt-feelings repression. This can be observed on the basis of Jesus and Christianity.

Jesus, with his divine message of love, was in conflict with the earthly entangled interests of the rulers of the time, became too dangerous to them, because of his popularity, and was ultimately killed by them. However, since the truth of his love-message had great resonance with people, it was twisted into “died for us” out of guilt-feelings through the murder of Jesus, the murder of the truth and the murder of the love.[2]

Christianity was with the topic of guilt-feelings altogether still predominantly in the female, emotional energy. Thus, the male authority in the churches controlled the still feminine worldview through allegedly releasing guilt as forgiveness, for example in the form of selling indulgences.

The masculine had taken the lead and the feminine, away from the actual divine love, oriented itself to this distorted “divine” standard of the masculine. The feelings of guilt were repressed, until finally there was a complete split of male mental body dominance and female emotional body victimization.

Collective state of consciousness: Universal access was lost and replaced by the earthly power of mental body authority.

In this time of division, the standard of Christianity was gradually replaced by scientific progress and by the interests of the wealthy family clans, with their earthly power and influence. Thus, the masculine rational worldview, completely away from the Divine, became the new standard of the old age through science and finance.

The earthly claim to power of the masculine appeared openly at this point, without distorted “divine” authority. It was perceived by people as an oversized earthly power, however, because of being energetically mixed with the Universal Plan.

In Christianity, the earthly claim to power had still been hidden behind the Divine and was therefore not openly recognized. Thus, out of the dependence on forgiveness, people tried to satisfy this claim. In general, this succeeded when the guidelines of the church were followed.

The new scientific-rational standard, on the other hand, could be met by emotional body persons and down-to-earth people only with difficulty or not at all. This led to feelings of wrongness respectively guilt and into a bottom-up victim attitude. Progressive self-esteem violations and resignation turned into rejection against the mental body authority.

Out of the victim attitude, coupled with accusations of guilt against the earthly rulers, these became opponents. Enmeshed in earthly hostility, conspiracy theories arose that regarded the energetically perceived loving Universal Plan as an “evil plan for humanity”.

In addition, personal injuries due to experiences with authority are projected in different ways onto the actually existing power of the earthly rulers. This can happen as a complete projection without truth content or also as a partial projection with exaggeration. In the case of complete truth content, however, it is a matter of revealing actual abuse of power.

Before that, in the middle ages, conspiracy theories were rather rare, since most unpleasant events were not explained by the machinations of human conspirators, but by the inscrutable counsel of God. If conspiracy theories nevertheless occurred, they were blamed on the devil, who had seduced people.[3]

In short, “the Christianity of that time, became the conspiracy theorists of today.”

Collective state of consciousness: Universal access is given and is at the same time the loving-emotional earthly measuring.

Today, in the new age, the karmic dominance system of the earthly rulers is only anchored as residual energy in the earthly structures. Until their gradual transformation, however, they still remain the truth of the conspiracy theories. At the same time, the much greater power from the loving Universal Plan continues to be transferred for a certain time to the much less powerful earthly karmic dominance system. This makes the conspiracy theories seem so implausibly exaggerated. People can link to this for the distinction of the truth content.

When the victim attitude with the karmic guilt-feelings-blockade is healed, the orientation is no longer on the earthly power, but again on the Divine. Thus, the earthly rulers are deprived of their dominance. The karmic power-blockade is dissolved and can be given up out of free will.

The earthly rational-scientific standard of the old age is replaced by the universal loving-emotional standard of the new age. Now the only and true power of the loving Universal Plan (Musubi) over the healed and divinely connected feminine finds its expression through the now cooperative and executing masculine into the earthly. This completely universally embedded feminine-masculine connected soul-love creates as a collective the loving earth.

How far has the loving universal plan progressed with the healing of the world in the meantime? The earth is already in the process of being purposefully healed. The following illustration describes the current status: 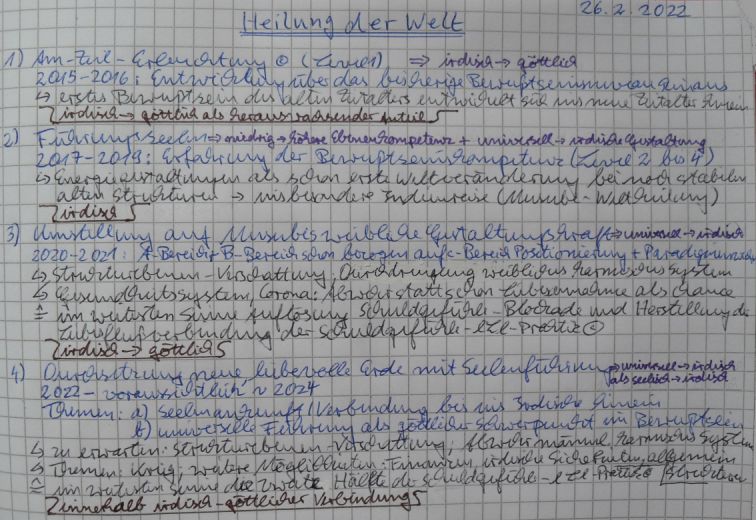 How is the consciousness-expansion of an individual supported in this phase of development? As procedures there is in particular the Indirect Love Energy Healing, as it takes place at present for the world. Of course, the indirect love energy healing is applied to individuals in a considerably reduced form.

Methodically above all the soul-earthly arrival is supported. This happens through the further affirmations of the Guilt feelings deletion – live love ‒ practice© after the Liebesflussverbindung (love-flow-connection). Via tender, special music the soul is emotionally invited to get involved with the earth again. For this purpose, it is cognitively explained what is different this time, so that it does not become a repetition of previous bad experiences. By means of a ladder exercise, the soul‘s arrival on earth can be re-experienced in a corrective way. In addition, a purposefulness exercise lets remove the obstacles in consciousness that are encountered on the way to the Am-Ziel-Erleuchtung© [Final-Enlightenment(AL)].

People can choose, whether they want to be healed through personal contact with the Am-Ziel-Erleuchteten© [Final-Enlightened(AL) Ones], prefer to proceed methodically (a mixture of both is also possible), or trust only in the collective world change by Musubi. This transition proceeds, although much more complex, ultimately in the same way as for individuals. The world heals to a loving earth.

Further to the new species, the new health care system, the new school system, and the loving Universal Plan

[2] “The End of Christianity, Christmas as the Festival of the New Age” by Ayleen Lyschamaya, December 2021, https://new-age-enlightenment.com/christianity/